NATIONAL INSTITUTE FOR RESEARCH ON ENGINES

The international importance of CNR certainly asserted itself even more predominantly with Guglielmo Marconi, the inventor of radio, who assumed its presidency in 1927. From then on, CNR became more and more an instrument aimed at increasing the prestige of Italy in the world context.

The birth of the Institute for Research on Engines, previously called the National Institute for Research on Engines, dates back to the 1940s, in an Italy strongly influenced by the so-called “unfair sanctions” of the economic blockade of the League of Nations, which badly saw the colonialism of our country in East Africa. The provision, dated November 18, 1935, prevented the foreign supply of raw materials and energy sources. The CNR was affected by this situation and, with the presidency of Marshal Pietro Badoglio in 1937, it became more and more a center of technological research in preparation for a future war, which seemed increasingly probable. Since the economic blockage caused the shortage of oil and petrol for the automotive and industrial sectors, studies intensified for the use of alternative energy sources, which allowed to avoid an almost total paralysis and consequently the impossibility of participate in weapons equal to a possible conflict.

In this context, one of the most prestigious and active scholars who dealt with alternative fuels was prof. Pericle Ferretti, Professor of Mechanics Applied to Machines of the Engineering School of the University of Naples. He proposed the establishment of an Institute, whose specific function was precisely the study of engines that could operate with low consumption and high yields and that could exploit fuels other than oil and its derivatives. The objective behind the foundation of the current Motrori Institute can therefore be said to be extremely modern and highly topical even today. On May 9, 1940, the CNR, in the presence of King Vittorio Emanuele III, officially inaugurated the National Institute for Research on Engine. The funding necessary for the many cutting-edge equipment was granted by IRI (Industrial Reconstruction Institute) and the chosen location was the current one, that is, overlooking Eugenio Barsanti and Felice Matteucci, dedicated precisely to the two Italian inventors of the spark ignition engine. The same prof. Ferretti assumed the position of Director of the Institute, which he kept until his death in 1960, when the storm of war, thanks also to the prodigious recovery of that decade, was no more than a memory.

In 1940 the School of Engineering of the University of Naples was located in via Mezzocannone, in the historic center. After the war, the Polytechnic remained in the same location until 1964, when it was moved to the new Fuorigrotta headquarters, Piazzale Tecchio, where it is still very close to the National Institute for Research on Engines (which after the war lost the adjective “National”, while retaining the same connotation of a world-class avant-garde institute). The location of the Istituto Motori took place in the Fuorigrotta area instead of in the more central one of via Mezzocannone, because this district was at the time the symbol of a rigorous urban reorganization, in which majestic buildings, with a strictly square shape, were a sort testimony to the power and rigor of the government of that time. Fuorigrotta was in fact already home to the Mostra d’Oltremare and Italian Labor in the World and the Collegio Costanzo Ciano (better known as the NATO headquarters in Bagnoli).

The idea of founding the Pericles Ferretti Institute had a wide scope: similar institutes were springing up all over the world. It is worth mentioning a few: in the United Kingdom the “Ricardo” research laboratory, founded by the pioneer of engine research (especially diesel) Sir Ricardo; in Germany the FKFS (Forschungsinstitut für Kraftfahrwesen und Fahrzeugmotoren); in the United States the NACA (National Advisory Committee for Aeronautics), and then, also in the United States, the Engine Research Center of the Department of Mechanical Engineering of the University of Wisconsin.

The original 1940’s building has now been replaced by a futuristic structure designed by the architect Pica Ciamarra, inaugurated in 1990, after the demolition of the existing building, which became necessary following the severe damage suffered during the 1980 earthquake. 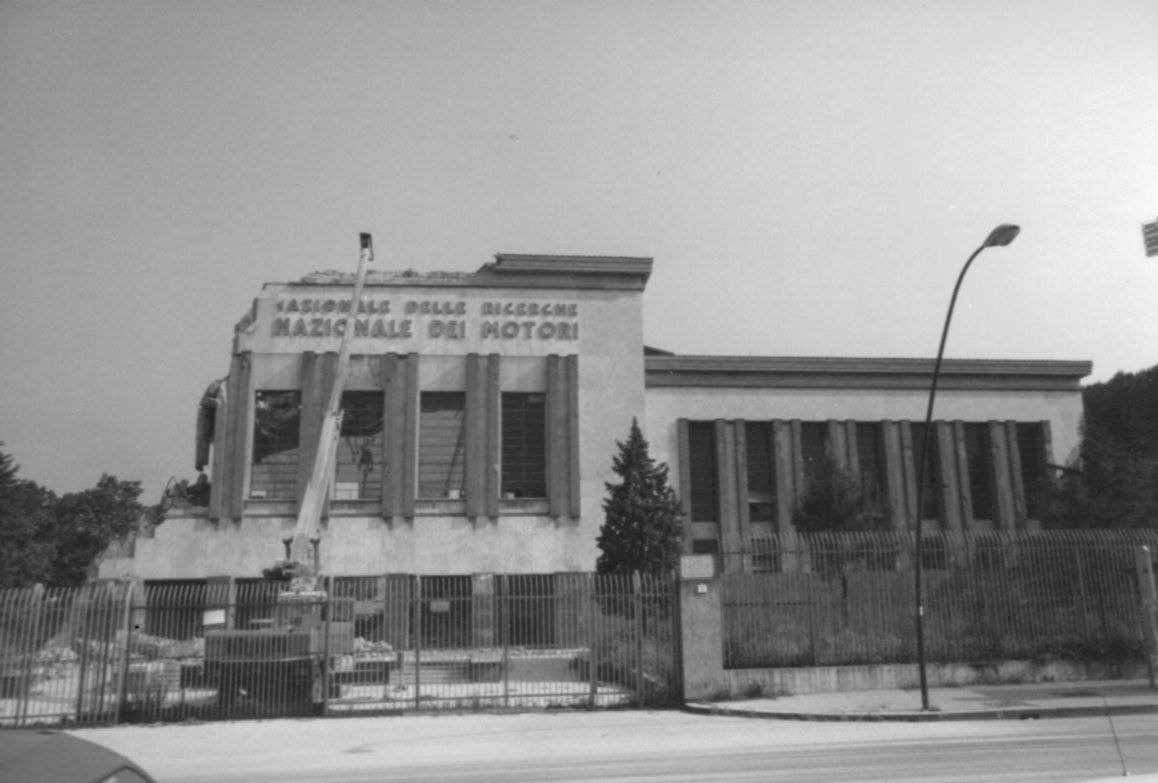 Rearranged from an article by Eng. Paolino Vitolo http://www.isses.it/Convegno230208/IstitutoMotori.htm

INSTITUTE FOR RESEARCH ON ENGINES

More information on the new building of the headquarters of the Istituto Motori, built in the second half of the 1980s, can be found in the ermes-multimedia archive (Polo Tecnologico del CNR – Istituto Motori) and on the website of the “Pica Ciamarra Associati” studio, in particular from pages  1984 – Napoli, Istituto Motori del C.N.R.  and from the video documents  IL MOTORE E L’IMMOBILE, ARCHITETTURA PER I LUOGHI, PIAZZA (in inglese A SQUARE, WHAT IT IS?) e FACCIAMO PIAZZA PULITA.